Citizen Scientists have now been taking skyglow data with the Loss of the Night app since the end of April, and the New Year seems like a good time to give some feedback about how the project is going. Here's a map of all of the locations from which someone has submitted data: 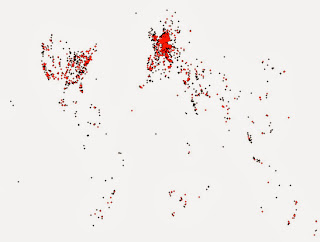 In total, participants have done 15,600 individual star searches in 2,241 sessions under night conditions (sun at least 16 degrees below the horizon and moon below the horizon). The 10 stars that have been searched for most frequently are:

Despite these large numbers, there are actually still 504 stars that no one has searched for. Most of these not-yet-studied stars are visible from the Southern Hemisphere, but a few are late winter stars that will star rising higher in the sky as winter progresses.

In 946 cases, the app has been used on a night with no clouds, and the observer has examined at least 7 stars (red dots in the map above). These are the minimum conditions we need in order to estimate the sky brightness, but the more stars a person observes, the more accurate the measurement is. So if you are an app user, please click "continue measuring" and add a few additional stars!

Thank you to everyone who has used the app! In the coming week I plan to write a post about our plans for a future upgrade, and I would really like your feedback to try to improve the app.

In case you missed them, here are the four most read posts of 2013:

Finally, we were featured on Eyes on the Sky this week, so I wanted to share the video. The more people that use the app, the more valuable the dataset becomes, so please share news of the app whenever you see it!

Posted by Christopher Kyba at 2:38 AM