What prevents us from seeing the stars?

Last night I was in Brussels, Belgium, and as the sky was clear I had the chance to look for stars at an open area just outside of the Brussels Central Station. When I first looked up, it seemed as if there weren't any stars at all, and I think this is the impression that most people would have. But when you look at the dark sky for a bit longer, and screen out some of the glaring light using your hands, it turns out you can see quite a few stars!

Here is my observation: 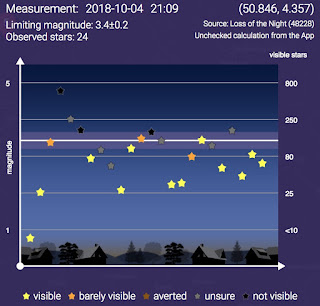 The limiting magnitude was around 3.5, which means that a few constellations (including Cassiopeia and the Big Dipper) were visible. But I think if I had asked passersby how many stars they thought they could see, their initial guess would be either zero or perhaps "one or two". The problem is not only that the sky is bright, but especially that glaring lights and illuminated buildings make it hard to look at the sky with dark adapted eyes. Here is a street view several blocks away from the station:


If you have to look up directly into a streetlight, you're not going to be able to seem much more than the streetlight... Contrast that contemporary view with van Gogh's impression of a night scene in Arles. 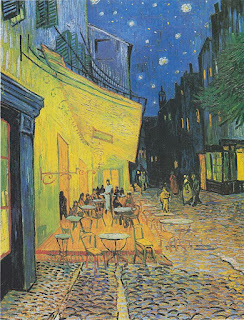 Van Gogh's scene is notable in how there are no glaring lamps at all, and for the relative darkness of the building facades. The scene provides an inspiration of what I think we should aim for in urban lighting: warm feeling light, no glare, no street light directly shining on windows, good uniformity in the pedestrian areas, and above it all, bright stars shining visibly in the night sky.


If you look up again at my observation, you will see that for a number of stars I had to report that I wasn't sure if I could see them or not. These stars were mainly in the constellation Draco, which is quite extended, and therefore hard to orient towards when the sky is bright. I hope that in a future version of the app, we will be able to further optimize which stars the app asks you to examine. I recently requested funding from the EU for a big project, in which the Loss of the Night app plays a small part. If the proposal is successful, I would be able to produce a new version of the app sometime in 2019 or 2020. Please cross your fingers for me!

Posted by Christopher Kyba at 6:16 AM No comments: