Stralsund Germany at night observed from the @NASANPP satellite. Marienkirche is located at the right border of the crosshair. pic.twitter.com/RQlJzUKxrq

Instead of seeing the Milky Way preserved over the (otherwise) UNESCO World Heritage city, you see these parallel lines in the sky. pic.twitter.com/bMLuLTvNo0

The dark lines are the shadow of the church(es), the bright parts are light that simply missed the church(es). Sankt Jakobi in this photo. pic.twitter.com/FJ07euEg9v

In addition to shining into the sky, the floodlights hit nearby trees, very likely causing them stress (1/2). pic.twitter.com/zZtkywOI6o

The glaring lamps are no picnic for pedestrians either. pic.twitter.com/YuGN65fQxr

And the total amount of light is also a lot more than is needed to attractively light the facade. pic.twitter.com/VIfYaov04h

It doesn't have to be this way. With more clever luminaires, it would be possible to light the facade only, and bring back the Milky Way! pic.twitter.com/omJ4PMCB3p

Posted by Christopher Kyba at 8:14 AM No comments:

I wanted to share a great observation made a few months ago by a Loss of the Night project participant from Portugal: 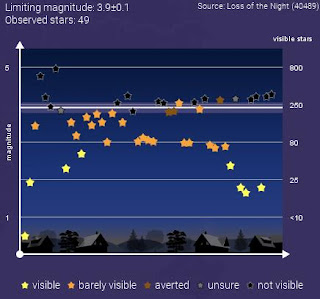 As you can see, there is a very clear separation (white line) between the stars that were visible (yellow, orange, and brown) and those that were not (black). You can also see how thanks to the observer examining so many stars, you can have a lot of confidence in the result, and can even measure how consistent the observer's result is. When you first start using the app, you might not have results as consistent as this, but with a bit of practice it becomes easier and easier to cover a lot of stars quickly.

While the app can provide more accurate data, I want to stress that it's not a replacement for Globe at Night! The app doesn't include stars with limiting magnitudes above about 5.2, so in areas with little light pollution, Globe at Night is a better method. In addition, the Globe at Night time series goes back over 10 years, and there is therefore a lot of value in continuing to contribute to it. In my opinion, it's the best system we have for tracking global changes in skyglow. So please consider contributing to both projects!

If you make an observation with the app, you can easily see a similar plot for your own results. Just head to My Sky at Night, zoom in to the area where you made your observation, and click on it to bring up this chart.
Posted by Christopher Kyba at 3:13 AM No comments: