September 12 is the second-ever International Night of Skyglow Observation, an official event of UNESCO's "International Year of Light". Around the world, citizen scientists will observe how much light pollution is in their community by looking at the stars. The link above is a very short tip on how to do it.

In Berlin we'll be holding a special event that night, a Flashmob for Science, in which many people will show up to make observations simultaneously at a single location. The flashmob will take place in Park am Gleisdreieck at 21:30 on September 12. More details will be on the Facebook Event page. If you plan to come, please sign up there so that we can communicate with you (e.g. in case of cancellation due to rain).

Here's a map, we will do the observation right on the spot marked by the pine tree.


Hope to see you there!
Posted by Christopher Kyba at 6:09 AM No comments:


So I went on a trip especially to collect some images for a light pollution talk I'll be giving soon.  I started at a new shopping mall that was recently built on the edge of town, and then drove out to my home in the country, stopping to photograph whatever notable lights I saw.  In practice it didn't quite work out - I saw some pretty shocking examples that I could not photograph because there was no safe place to stop the car (often, the lights themselves were part of the safety problem).

So the two good examples are from a recently built shopping mall. Although their signage out front is very brightly  lit so that it can be seen from far away by fast moving traffic on a nearby freeway (not pictured), they put a lot of thought into their parking lots. Good full cut-off fittings that illuminate the ground beneath very well, and they're well placed so that there are no shadows in doorways, stairwells, behind walls, etc.


Only a kilometer away, I found street lights with bad glare - The photo shows how evenly the road is lit, but the glare is so bad from the lights that potholes and other defects on the road surface become hard to see when moving. Further down the same road is a small shop serving a rural community. In the name of security they have put up a number of floodlights in their parking lot. Unfortunately, every one of these lights shines towards the road and into the eyes of oncoming traffic. Very dangerous. (Bonus point: see if you can find the Stop sign in that image, hidden by the glare!)


Finally, even further out from the city, in a bend on a particularly dangerous and badly maintained road, is somebody's home. There is a crime problem in the area, so the owners have obviously gone for the Easy option here: A single enormous floodlight to illuminate the yard. As with the shopping centre above, this means that every passing motorist gets blinded at the worst possible time. And of course, every feature in the garden now casts deep shadows where the bad guys can hide.

Posted by Christopher Kyba at 7:40 AM No comments: 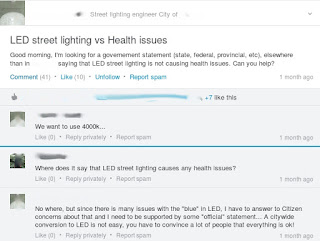 Posted by Christopher Kyba at 1:51 AM No comments:

During the coming week (until August 14), we are running the first in a series of Loss of the Night app community experiments. This month we're asking people to make multiple observations as the stars come out during twilight. Since many observers live in places without much light pollution, twilight offers a way to do an apples-to-apples comparison.

The more people that take part, the more likely that we'll have a result that's statistically interesting. So if you have a clear sky sometime in the next week, try making an 8-star observation after the first star is out but before it's gotten all the way dark. Try to do the measurements quickly, so that the sky doesn't darken too much while you are observing.

I will present the results of the experiment at the webinars in September, but there will probably be a sneak preview for everyone on our mailing list.
Posted by Christopher Kyba at 4:58 AM No comments: