Berlin at Night - in color!

We flew over Berlin last Friday night, taking thousands of photographs in order to create a new color mosaic image of Berlin. Here is our original black and white mosaic: 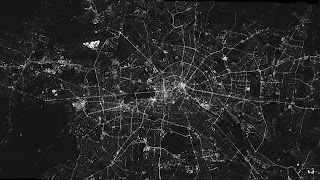 One of the things that makes Berlin particularly interesting for those of us studying artificial light at night is that Berlin makes use of a wide array of lighting technologies. You can even still see the former border between East and West Berlin at many places because of a change in the color of the lamps. Here is a zoom-in of such a region imaged by the astronauts on the International Space Station:


The big black area is the former Tempelhof airfield. To the right of it are two streets, one orange, one more white-ish. Here is what the area looks like in our aerial images:


You can see that the aerial images have far higher resolution, allowing us to see a lot more detail and understand better what the sources of the light were.

The flight was taken during the Berlin "Festival of Lights". Here is one of the areas of the city that participates in the festival:


Alejandro has also produced a video showing the view from the aircraft as we fly over Berlin. The video consists of multiple tracks across the city. Note that when the aircraft was flying Eastbound, the reflection of the moon is periodically visible from small lakes and the Spree river (e.g at 2:37).


This work was done as part of the Verlust der Nacht research project, and was possible thanks to the Short Term Scientific Mission of Alejandro Sanchez de Miguel to Berlin, which is funded by the Loss of the Night Network.


New visitors: this blog is dedicated to the Loss of the Night app and citizen science project. For more information, you can read our first blog post, or even better, click the link and try out our app!
Posted by Christopher Kyba at 3:00 PM