GLOBE at Night has announced the dates for the 2014 campaign: 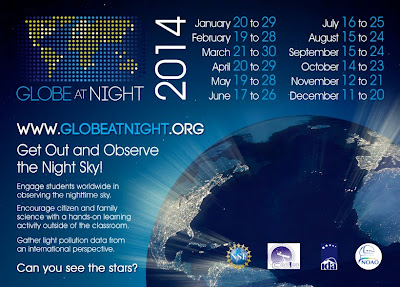 This is the first year that the campaign will run all year long, so (depending on your latitude) you might be able to help out scientists like me with some summer stargazing! GLOBE at Night has been building a very useful time series of observations since 2006, and it's essential that it continue into the future. This spring, we published results showing that "citizen science provides valuable data for monitoring global night sky luminance". So please plan to take part in 2014!

For both the Loss of the Night app and GLOBE at Night, it's important the moon is set, and that's why the campaign only runs about 10 days per month. The GLOBE at Night dates are a bit conservative, but are a good guide for when the app will work. For example, in Berlin, we will have moon-free periods of astronomical darkness on January 17 (for 10 minutes), January 18 (1:14), and January 19 (2:19). With the app, you can try to make a measurement at any time. If the moon is out or twilight isn't over, then the app will warn you that it's "not dark enough".

The plan is that next year the Loss of the Night app data will be an official part of the GLOBE at Night campaign, so you should be able to see your observations on the GLOBE at Night interactive map. We're still sorting out the details, but I hope we'll have this ready in time for the campaign's start!
Posted by Christopher Kyba at 12:22 AM

Email ThisBlogThis!Share to TwitterShare to FacebookShare to Pinterest
Labels: GLOBE at Night