Every observation produces useful data, but the more stars you observe, the more precise your data will be. To demonstrate this, here is an example of a minimal complete observation (7 stars), taken by my former colleague Marco Starace near the center of Dresden, Germany last night: 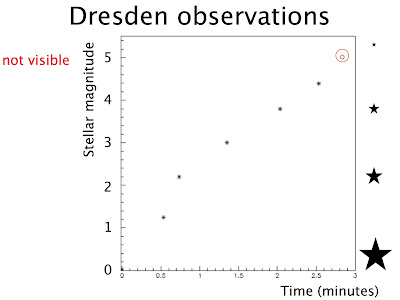 The black stars show stars Marco could see, and the red circle is the one star that Marco was not able to see (Fainter stars have a larger magnitude). Based on this data alone, our best guess for the limiting magnitude (faintest visible star in the sky) is probably somewhere around 4.7. But we would also have to assign a very large uncertainty to the observation, because it's possible that Marco made a mistake with star 6 or 7 (or even on other stars). If he made a mistake on the last star, the limiting magnitude could be as large as 6.5, and if he made a mistake on the 6th star, it could be as low as 3.8. It is critically important to understand exactly how large this uncertainty is, so I hope that we will be able to obtain a grant to study this in the future.

But look what happens when Marco continued past 7 stars (the blue square is a star he was unsure about): 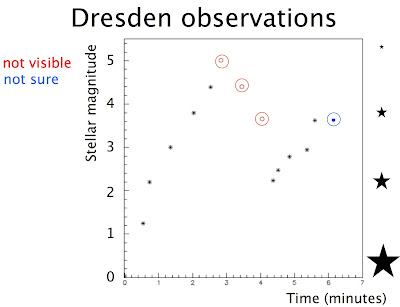 Whenever you observe more than 7 stars, you help us in two ways. First, your observation will be of a higher quality, because of the reduced uncertainty. Second, you help us to better understand the results of observers that search for only 7 stars. That's because we can make an estimate of limiting magnitude based on your first 7 stars, and then test how well that estimate holds based on your additional stars. This will help us to eventually produce unbiased estimates, and it will also help us estimate the uncertainty on those 7 star observations.

One other thing that I hope this data conveys is that incorrect decisions aren't the end of the world. If you search for a lot of stars, then we will be able to make sense of your data, even if there are occasional mistakes somewhere. With time, we will learn which stars users find it easy to make accurate decisions about quickly, and we will also learn which stars are problematic (long decision time and high percentage of incorrect decisions). This information will make future versions of the app more accurate and also easier to use.

So thanks to Marco for his observations, and thanks to all of you who go past seven stars!

(For anyone just joining us, you can download the Loss of the Night app here. Also, we need a translator for the Russian and Arabic version ASAP! If you're interested, please contact me.)
Posted by Christopher Kyba at 2:36 AM